Each member began setting up on stage looking like a group of art school misfits that dropped out in order to dedicate their life to music (and I mean that in the best way possible).

Sam Bond’s Garage is an incredibly intimate venue with a small stage and small area for standing. Majority of the crowd was actually sitting until Guerrilla Toss got a few songs into their set. Speaking of the crowd, the turnout was shockingly small. Usually the Pacific Northwest is on-top of following more obscure artists, but it seemed this was one of the few instances where that wasn’t the case.

I spoke to drummer Peter Negroponte after the show and he asked for my opinion on the reason for the relatively small turnout and what the Eugene music scene looked like. I told him there is a fairly large scene, but a very specific demographic of people that are primarily interested in this funky, pop, mellow bedroom-rock type stuff (that’s honestly the best way to describe it). Even though we both agreed that isn’t a genre we listen to, I told him the fact that Guerrilla Toss’ music has heavy psych influences and TONS of energy, this concert would have been perfect.

The real reason I believe there was a small turnout was because the venue had a twenty-one and over requirement and at least around 60% of the people that follow the Eugene house show scene are under that age. Negroponte told me the turnout for a previous Seattle show was a lot better, and the fact that there was no age requirement was most likely responsible.

Regarding the setlist, Guerrilla Toss played a wide array of songs ranging from their Eraser Stargazer LP to their newest What Would The Odd Do? EP. The band also put on an excellent light show by their light engineer Willie. I talked to Willie after the show and he told me he prepares digitized, distorted images before each show. He brings a projector, lights, and even a fog machine to every show. When it came to the lights in particular, he actually does them on the fly which was awesome.

The concert experience in particular was made even more special due to two highlights. The first of these was during the last leg of their setlist when lead singer Kassie Carlson announced the band had a few songs left, and the next one they were going to play was from their newest EP. I immediately responded with, “Please be Moth Like Me!” Carlson politely responded with, “Is that what you want to hear?” and thankfully I had the rest of the crowd to back me up in agreeance. Kassie quickly turned around and said a few brief words to her bandmates as they all nodded their head in agreement and went into Moth Like Me.

Secondly, during multiple songs, the band took detours after the usual allotted time of the track and went on a prog rock escapade. There would be slow builds that transitioned into absolute madness which one would never hear if they weren’t at the concert.

Overall, this has been the best concert experience I’ve had the whole year. All band members were super approachable after the concert and were willing to sign my CDs and chit-chat about the setlist. If you ever see Guerrilla Toss coming to a city near you I highly recommend going to the concert, especially if tickets are as low as they were at this venue. 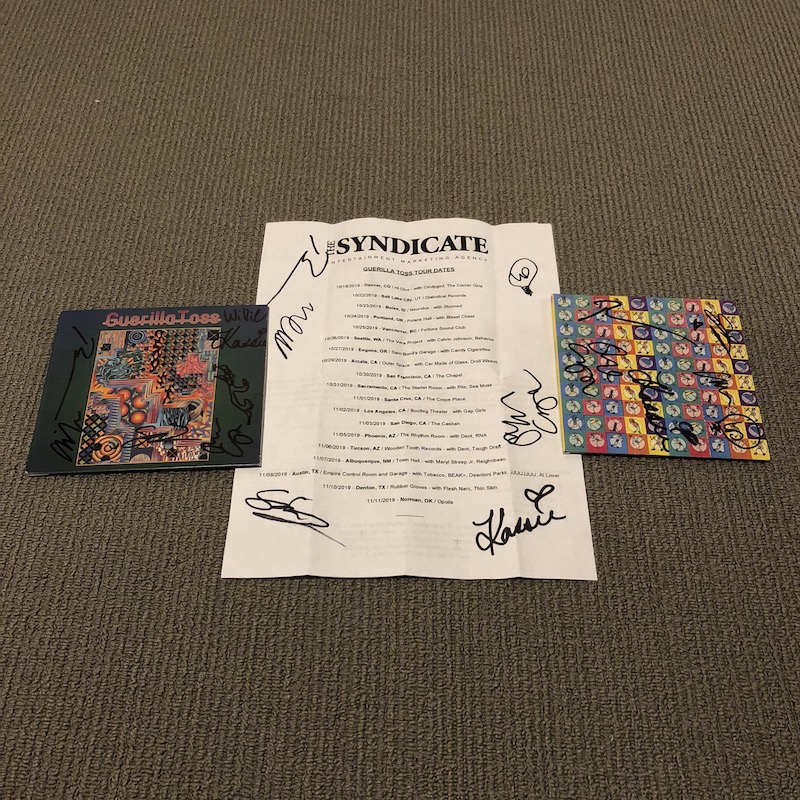